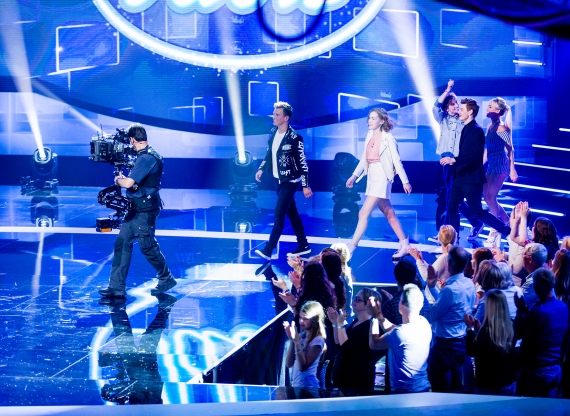 How would you describe your current production skills?
I’ve been a Steadicam Operator for over 25 years, a DOP and cameraman for all kinds of movies, commercials and TV programs. I am also a Technocrane operator and own a Facilities company with over 25 employees: www.thecrew.nl. We have 2 OB trucks and several camera crews for all kinds of TV shows. My business partner started as my focus puller 16 years ago, and he is also a Steadicam operator.

Are you a family guy, and does that influence your work in any way?
I am a father of 2 boys, 11 and 15 years old. The oldest has his own small Steadicam and wants to follow in his father’s footsteps. I’ve been married for 24 years. I first met my wife when she worked with me as sound engineer. So it’s all in the family.

Have you moved around a lot in your career
Sure, I have travelled around the globe for many, many years. From Antarctica to Mongolia, North to South and all over.

Going back to your childhood and growing up years, do you think there was anything going on that could have influenced you towards your current career?
My father had a audio and video company where I started working at age 15. I started at the bottom and worked my way up. After 4 years my father helped me to move on by working at another company, so I started learning different ways. Then 16 years ago I started my own company, which I still have, with my old focus puller, my business partner from the start. 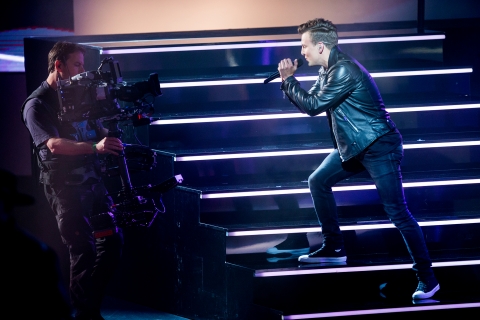 Picture#2: This is a shot from The Voice of Holland.

How did your career progress?
After doing sound and regular camera work at my father’s company, I bought an old second hand Steadicam SK2. I started learning and became what I am now. I never followed any workshop or had anybody to teach me. I spent hours learning the craft, which resulted in my winning the Diamont award in the Netherlands a couple of years ago. They placed a sign in the form of a diamond that hangs at the media park in Hilversum where all the studios are. It’s a very nice recognition. Last year I did the Eurovision Song Contest, which was very cool.

Have you done some formal training anywhere along the way?
No.

When did you first discover and start using Transvideo monitors?
When I started using Steadicam, first I had an old SK and later a Glidecam Gold. Then I started using a professional rig, I bought the MKV Nexus with a Transvideo monitor around 10 years ago. That monitor is still on my rig, it has seen so many jobs, from MTV Awards, concerts, Eurovision etc and has been on for many, many, many hours; it’s still my workhorse on a daily basis. If I ever stop, that monitor should be displayed in a museum. It has seen more then you can imagine.

Picture#3: Once a year we do the Musical Award Show Live. Director is Marnix Kaart. I have worked with Marnix for over 15 years, with the Eurovision Song Contest in 2021 as the biggest one.

What features on a monitor do you value most, and also help you in your work?
With all the framelines you can build, it’s been great during Eurovision where every country had its own letterbox aspect ratio setup. Couldn’t do it without my Transvideo monitor. High brightness is essential, and of course ruggedness and reliability, which my Transvideo brings me.

Funny fact: we have 3 Steadicam rigs here now, all of them with Transvideo Cine6”SBL monitors on them. I also bought 3 spare monitors; that was a waste of money, they are sitting there just in case, doing nothing. Never required.

There just isn’t a different monitor for me. I’ve tried other brands, but the features, ruggedness, and service from this brand, it’s the whole package. My first one is close to 10 years old and still my main monitor on my Steadicam. 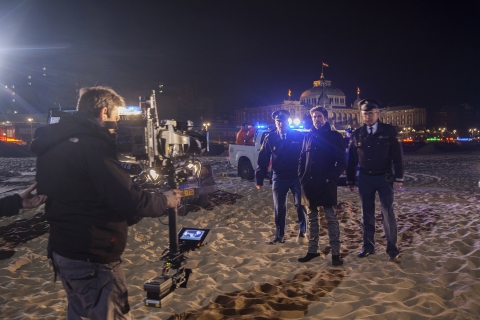 Picture#4: The Passion, Den Haag. Director David Grifhorst. It tells about the suffering, death and resurrection of Jesus. It’s drama and music in one show. It’s the perfect combination for the creative use of Steadicam. The show is part pre-recorded then when we go live, the pre–recorded parts are integrated. There is a lot of Steadicam in there –I’ve been shooting them since 2011.

You have a long list of work that you’ve accomplished. If you look back over it which jobs stand out in your memory, and why?
Every job has its own story - every TV show, movie, commercial. You work with highly professional people, making great content, which I still enjoy. It’s the greatest job out there. Not one day is the same. And on top of this, I truly think that Steadicam is the greatest way of moving the camera. Being part of the scene, nothing can beat that for me.

As a Steadicam operator, there is quite a physical aspect to it. Have you had to keep yourself in top condition for that or does just doing the job keep you as fit as needed?
Being so much in the vest did help me to forget about the physical aspect at all. It just feels like a coat, I am so used to it.

Looking at your IMDB entry you have done feature films, television shows and series, documentaries, music shows and more. Does one genre appeal to you more than the others?
I like the different jobs the most, doing a movie is very different from doing a live show like The Voice, or a concert. With TV or concerts it’s a continuous effort. Doing film is mostly waiting. I only work for DOP’s who use me as B cam AND Steadicam op. There are a lot of DOP’s who hire a Steadicam operator just for certain scenes. They are coming from the grip department and for some reason won’t be used as B cam operator. I am more than a Steadicam operator, I am also a camera operator and crane operator. So use me for that, I can’t stand having to wait for a shot. I’d rather pass.

Is there anyone you would like to thank for helping you along the way in your career?
My father was my biggest critic. It was never good enough; he pushed me to go further than others. I learned to be super critical about my work, and till this day, pushing to go further. 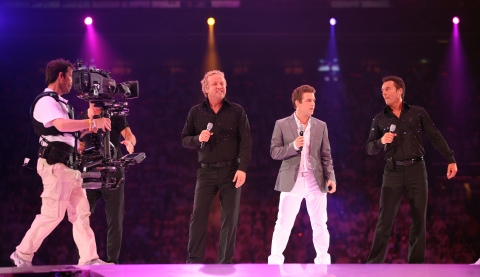 Picture#5: Toppers in Concert. Arena Stadium full of 70.000 fans, one big music concert. Been shooting them for almost 11 years now. 4 hours live on tape, no breaks. Much fun.

Is there anything you haven’t yet done in your production roles that you would like to do?
To be honest, not really. Perhaps one good TV show in one shot. 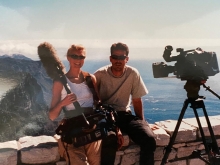 Me and my wife. This is how we met; she was a sound engineer. We have been travelling together since then, all over the world. 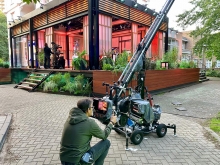 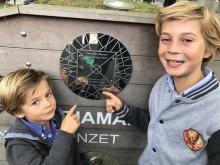 R: Olivier, L: Valentijn. My pride, the oldest is now 15 and started Steadicam a year ago - In front of my Media Diamond Award 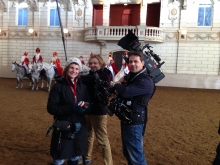 Shooting the Movie Alles is Liefde. Much fun, where we did an opening scene of 3.4 minutes in one Steadicam shot 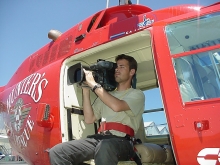 When I started many, many years ago, I did a lot of helicopter shoots. This one is ready to fly me over the Grand Canyon 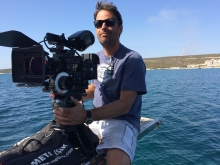 This is in Turkey, where I was the DOP of a commercial for Corendon, a holiday and airline company 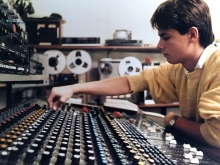 Me at age15 working in my Dad’s company

On location. The director reviews the shots on my Transvideo monitor

Backstage,ready for the start of the Eurovision Song Contest 2021