Benjamin Treplin, experienced professional camera and Steadicam operator on his career and his experience of Transvideo 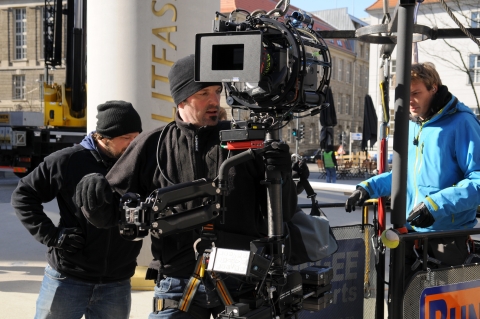 How did you get started in your career?
In Munich, where I grew up, it took me almost a year to figure out what I wanted to do. I was drawn to photography at an early age, and thought, "Ok, let's try to get an apprenticeship with a photographer." I was lucky enough to get one with a photographer who did still life, people, and table tops. I learned pretty much everything you have to know about photography, from 35mm photography to large format.

And after that?
After three and a half years I realised that this is not how I want to make my living. I went to the next thing related to that, filmmaking and cinematography. I got lucky enough to get an internship at Dedo Weigert, the guy who invented the Dedolights. He has a company selling everything from filters to fluid heads and certain cameras. I spent one and a half years there, then went out to my first job as a 2nd AC or clapper loader. That was back in the day, still 16 mm, on a TV series for a German TV station, and did three seasons there. Then I moved on as a 2nd AC and did that for three years, then 1st AC for one, maybe two, years with an overlap in there.

Were you enjoying yourself?
Yes, I enjoyed myself, I loved doing 2nd ACs. I enjoyed that very much. I didn't enjoy focus pulling that much, that wasn't my cup of tea. I got to know a few Steadicam operators, and one of them did a lot of TV shows, live TV, and I worked with him over the course of one and a half years, as a focus puller for Steadicam. Basically, if you do TV show, it's more like you carry the schedule, what's going to happen for the next one and a half hours, and you make sure that the operator doesn't fall off the stage. Focus pulling is not an issue on 2/3” cameras. Then I came across a Steadicam workshop and thought ‘All right!’  That was always appealing to me and so I did the workshop.

Where was that workshop?
That was in late 2000, and it was in Italy in Umbria, and it was a bit of out-of-the-ordinary workshop.
I think it was one of the first Steadicam workshops Tiffen ever did. There were eight or nine operators there, and 34 students. A huge bunch of people and a lot of operators. That was quite an impressive week.

After that I was totally hooked up to Steadicam and tried to find funding and eventually buy.

It took me a bit of time to get the money ready, almost a year. Then I bought my first kit, did another workshop in the U.S., the Malibu Classics. 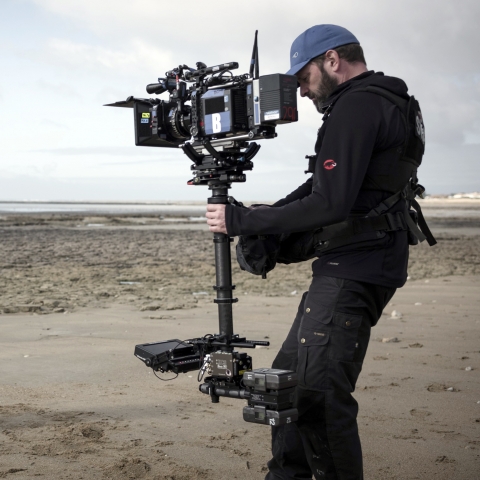 What was the first kit that you bought?
My first kit was a PRO vest and PRO arm, and I still have both, and then a rig from a guy in Germany, Markus Bernhardt, at the company called Bärbel; I had his rig for about seven years. Then I bought a new rig, an XCS from a guy in America, Greg Bubb.  At certain points in your career you grow out of equipment, it's just one of those things.

My next consideration was the arm. I choose to spend a big chunk of money on the arm. The PRO arm is an arm I will probably use until the end of my career. I spent my money on that because it was, for me, from testing, way better than anything else I could lay my hands on.

So you have some experience of Transvideo?
Yes I do. Basically my first monitors were Transvideo Monitors. The very first was a seven inch CineMonitor. I still have it, never sold it. Then as my Steadicam career progressed, I went to a green screen CRT, a TB6, which has super anti reflection screen and it's unbelievably bright. Essentially you can have a full reflection of the sun on the screen and you still can see your image, no matter the angle you're looking at screen. I used that for 10 years plus.

Then I bought an eight inch Transvideo, an X-SBL. That was the first monitor where they had a high bright version and that's when I went back to Transvideo.  It's not purely a Steadicam type, it's actually a field monitor, which is mainly used by Steadicam operators because it's built like a tank with a solid aluminium housing, which is really strong. It survived two crashes which it had to endure. Next feature is the brightness and contrast ratio of the screen. Back then it was the best you could get. Recently Transvideo upgraded my X-SBL with a new screen and backlight. It brought it back to the level of best screen out there. CineMonitor HD8 XSBL. Improved contrast, brightness, and viewing angle.

Which of the built in tools, do you use on the monitor?
I use the frame lines and the bubble level. Sometimes I use the exposure tools as well. Most of the time, as an operator, exposure is not really your business. Working in Germany on TV drama or TV series or even feature films, if you do B-camera/Steadicam and two cameras at the same time, with some DPs they do want you to take care of exposure because they operate A camera. That's part of your responsibility then.

If you work with a DP who doesn't operate and is behind the monitor, at video village, or with the DIT controlling the exposure, you don't have to take care of that at all. Sometimes I use the exposure tools, but most of the time I don't, only frame lines and bubble level.

Do you use any other Transvideo equipment?
I do have a Starlite. Last December I bought a second Starlite and a Stargate as well.

I do have two other monitors, one Small HD, and one Boland. Essentially Boland is a nice cheap monitor with a good screen and a bright screen, good viewing, but it's not really very well built. It's not as water resistant as the Transvideo monitors, and it's basically a backup monitor. The small HD was also a backup monitor. It's one of the first they built, but when it failed after two years I struggled and failed to get good service on it. Probably I'm not going to buy a small HD monitor ever again. That really was a deal breaker, and that was the reason I went back to Transvideo. Essentially now this last year and bought the Stargate to replace it.

How you use those three Transvideo monitors you've mentioned?
The Starlite is basically a small Steadicam monitor and an onboard recorder, and sometimes used as a low-mode monitor, or a monitor for awkward angles when you have to push the rig in a position where you can't see the main monitor anymore. That monitor is light enough and small enough to place it anywhere on the rig  and still be able to see a frame, for certain moments. Mainly it's an onboard recorder. The Stargate is a lightweight monitor if I do running shots, I usually strip down the camera and strip down the rig to the bare minimum, and then I use the lightest monitor I have available with the biggest screen, which is either Boland or the Stargate, whatever's next on the cart.

I haven't used the Stargate yet because it's too fresh out of the box. That will be either an onboard camera for handheld work or studio work, or it will be the go to monitor on the Steadicam for running shots. 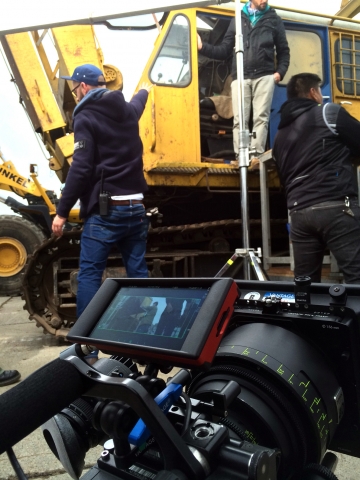 Benjamin - Starlite rigged as onboard - 2014

What is your experience of using Transvideo products?
All three are brilliant monitors. They're super reliable, they're built super sturdy and I don't have one Transvideo product that ever failed me. My first LCD monitor back then, SD CineMonitor, that thing is still working, and they just keep going. The only thing I sent back to Transvideo was my X-SBL, to get an upgrade. That was it. It has a few scratches and dents on the housing from the two crashes but still works fine.

I was, one time, not really protective enough with rain, and I got a bit of rain through the USB port, inside the housing. Usually I don't use a rain cover. I just use a gaffer tape and tape that over the knobs, and the dialling knob on the monitor on the lower part. With rain towers I should have been a bit more protected. I got a bit of water into the housing, and the HD feed went blank.  I opened the housing and found water droplets on the HD sockets inside on the PCB board. We removed the water, left it overnight on the heater. Next morning, put it together, switched it on and it worked.

What recent job you have been doing? Are you doing television or movies?
It's a mixture. The last year I spent exclusively in Prague, on two TV series. One was for Sky, ‘Das Boot’, second season, and the other one is a new Amazon series and I'm not allowed to talk about it. I worked on it for the first two of eight episodes. I filled in for a Canadian operator, who unfortunately two weeks before shooting broke his arm. Luckily I was available. The DOP was David “Moxy” Moxness ASC CSC, lovely guy. Absolute pleasure to work with.

That was my last year, the year before was one feature film that is hitting cinemas now. It's called Guns Akimbo, with Daniel Radcliffe.

The next one was a feature film starring a communist kangaroo - don’t ask.

Do you prefer a style of shooting? Drama or movies or television - does it matter?
It matters to the extent if all things go well, if you have a good script, if you have good actors and if you have a good director. To have a good team is, for me, the main thing. Second thing is, what you're actually shooting. Is it something you would like to watch yourself? If you have good people around you, you can shoot stuff knowing that you’re never going to watch it. But if these two things come together then you're almost in Heaven.

I don't really enjoy doing commercials most of the time, because the time pressure is massive, and you really don't have the chance to get to know the crew. By the time you're half way to knowing their names the whole thing is over. I prefer to do a long format narrative work.