This picture was taken on a Canadian Air Force base in April 2001.

"I shoot for 1 week around Edmonton , Vancouver and Victoria. 75% of the project was shoot with an ARRI435 on a STEADICAM. Most of the movie was ramped up at 150 fps with a 45° shutter. Since I have been using the CineMonitorII, I do not have problems anymore shooting at 150 fps for a long period of time as the power consumption is really low and allows one to achieve maximum efficiency. "

You can visualize the clip on www.jetfilms.com 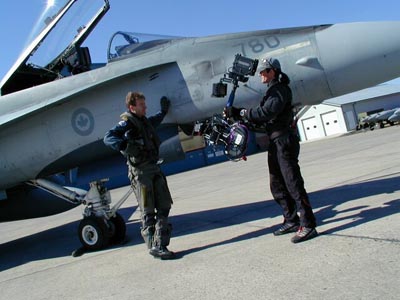