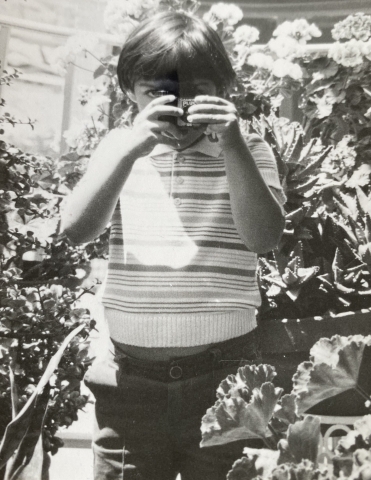 He has a great website demonstrating his camera and Steadicam skills across a wide range of material.

Q: Please tell us about the early part of your career.
“My father’s hobby was photography and Super 8 cine. From when I was a small child I would spend hours with him in his amateur lab, going through magazines, exploring his photographic equipment and looking at his super 8 home made films. Even before I could read I was being drawn in to the magic of films.

I started out as a young camera assistant and worked long and hard to learn as much as I could about the craft. From the beginning I found that I had a driving force within me to learn and always keep learning, and a desire to be the best that I can be. Now, I’m 39 with a lot of experience behind me, and I still have that same drive. The difference is, now I know I can produce good results, but that doesn’t mean that I can’t be better. I continue to learn too from the people I work with on set. They all have accumulated skills in different areas and that is all valuable information to acquire.”

“In 2004 I graduated in Cinema, Television and Advertising at the IAT Training and Research Institute Universidade Moderna. During the latter part of my training I worked as Steadicam Assistant on advertising, films, short films, documentaries and music videos, planting in my mind the possibility of Steadicam operation and motion picture work in my future career.

As part of my earlier education in cinema I worked as a producer for a while, and on one occasion the director asked me to source a Steadicam operator for a 3 day shoot. I put forward Eberhard Schedl, a well established German camera/Steadicam operator who lived in Lisbon.We quickly became good friends and he invited me to be his Steadicam assistant. I didn’t hesitate. This was the start of a long friendship and working relationship over 17 years.It brought me so much valuable experience, working in a cinema crew in all genres - top commercials, movies, documentaries, short films, music videos and more.” 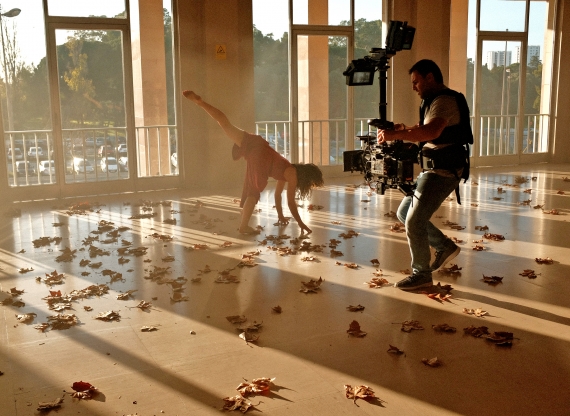 Q: When did you first get interested in Steadicam?
“I had already been aware of Steadicam at entry level from my University training and then in 2011 I saw a Steadicam Masters Workshop advertised in the US and I decided this was my dream, my opportunity to learn with some of the best Steadicam tutors in the business.
The workshop was amazing. I took to Steadicam immediately with Masters such as Garret Brown, Jerry Hollway, Ruben Slijter, Chris Fawcett and Peter Abraham. I developed a great relationship with Chris Fawcett, which we have maintained ever since.

In 2016 in Germany I participated in the 25th International Steadicam Workshop and Electronic Stabilizer Symposium, with Masters such as Larry McConkey, Peter Robertson, Nicola Pecorini, Patrick De Ranter and Jorg Widmer.

Buying my first Steadicam rig was a big investment at that stage of my career, with limited funding. I bought a mix of components, some new, some pre owned, some of which I would upgrade later. I couldn’t afford to buy a good monitor so I had to use the green screen Marell monitor that came with it on the basis that I would upgrade when I could afford it.
I started to establish myself as a Steadicam operator in addition to my camera work and I’m thinking I'm the luckiest guy in the world, because here I am loving what I’m doing.” 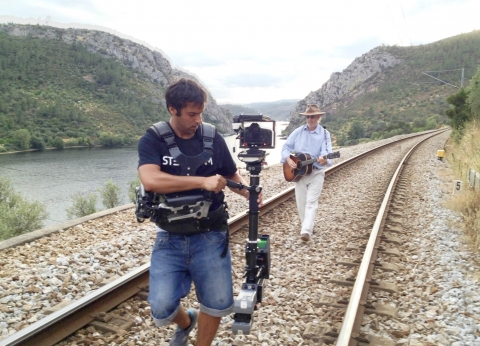 My first steps in Steadicam, shot for my own documentary ' Lost Raiana Song'

Q: Since getting your first Steadicam rig what have you been shooting?
“I have now bought another Steadicam rig. Over time I have shot movies here in Portugal as a camera operator and as a Steadicam operator, and I have shot a great many commercials. I’ve also been travelling a lot to Angola because there’s a big market there. Shooting can be a challenge because you often find a lack of professional facilities but the local crew makes up for that with incredible enthusiasm and a willingness to learn.

I was booked there to do some travelling car shots for a high end commercial but on arrival there was no camera vehicle and no camera or Steadicam mounts, just a camera equipment van. I asked them to clear all the equipment from the van and I set up in the back sitting on an apple crate and got some really great shots. Sometimes in these situations we need to be creative and find alternative options, but of course with all safety measures implemented.”

Q: What are the shoots that you enjoy the most?
“I enjoy it all. People come to Portugal to shoot films, commercials, music videos. I’ve been shooting music videos for artists from Portugal, the UK, Ukraine, many countries.With commercials usually all the shots are pre blocked so as a Steadicam op you go in and you do the moves as directed to the best of your ability. But with music videos you can be more creative and work with the DOP and director to suggest moves and contribute to the creativity, which makes it even more enjoyable.” 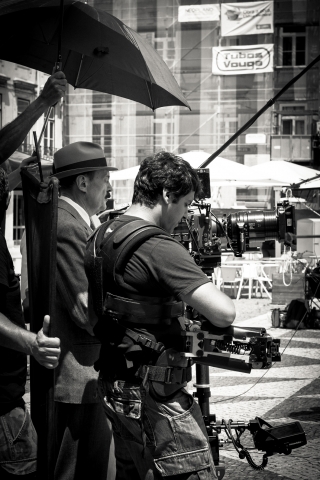 Q: What’s your experience been with Transvideo monitors?
“The first rig I bought had a green screen monitor and I started off using that.When I earned some money I wanted to invest in a new professional monitor. I was very confused about which monitor to choose. I spoke to my Steadicam friend Eberhard Schedl, and also with a camera rental company here in Portugal and they both advised me to go for Transvideo. They said they had found that they were excellent monitors, very rugged and very reliable, and that I would enjoy using it. So I bought my first Transvideo monitor, an 8” CineMonitorHD and I have not had a problem in all the time I have been using it. The Cinemonitor is very important for me to establish accurate framing. The image, the glass and the construction and design are all superb. I also use a lot the frameline guides, and Picture FX to flip the monitor with the user menu. It’s amazing and very fast. I also used the bubble level when I work without VOLT or Wave.

Then about a year ago I also bought a Transvideo StarliteHD monitor.
Basically with Steadicam I use both monitors. The Starlite I use especially for Low Mode shots with a bracket for the Steadicam Volt control box. The combination works extremely well.

The Starlite is also very useful for me to record the shots for my own reference.
When I know that I won’t need the Starlite for Low Mode I use it exclusively to record, and mount it with 15mm front rods.

The StarliteHD is very versatile because it is so lightweight and the image is so sharp.
When I work as a camera operator, I always mount the StarliteHD as an incredible on board monitor. I program the on board tools with my own setup, using the corner buttons. I usually use them to do playbacks and to flip the monitor if I’m using Low Mode on the Steadicam.”

Q: Have you got to know any of the Transvideo team?
“I met Jacques, the president of Transvideo at Steadicamp in 2016 and I was so impressed that he was taking the time to ask me personally how the monitor functions worked for me and if I would like to have anything different or maybe new functions. For me, it is so important to feel trust from the manufacturer of the equipment that you use and rely on every day of your working life, where your reputation depends on always getting the best results for your clients.”